Violence between rival fans erupted across many games in the Europa League for the second straight round of fixtures last night.

Last month, several arrests were made during Leicester City’s match against Napoli, and similar scenes of fan fights occurred last week in France and England.
In the latter stages of the first half, Marseille’s goalless draw with Galatasaray was halted for eight minutes due to crowd unrest and objects being thrown.

UEFA’s live match blog stated that the referee had paused the game due to “security reasons related to pyrotechnics.” Images showed lit flares being thrown between rival fans, with one hurled onto the pitch.

In an attempt to de-escalate the situation, Galatasaray manager Fatih Terim and respective club captains Fernando Muslera and Dimitri Payet entered the part of the pitch nearest to the fighting fans.
Marseille was embroiled in a crowd disturbance event for the second time this season; in August, their Ligue 1 match against Nice was called off due to a huge brawl involving fans, players, and staff.

After the home crowd threw water bottles at Marseille players, one of which appeared to hit Payet, fans eventually overpowered security and spilled onto the pitch for the ensuing mass riot.

‘We don’t want that reputation’ 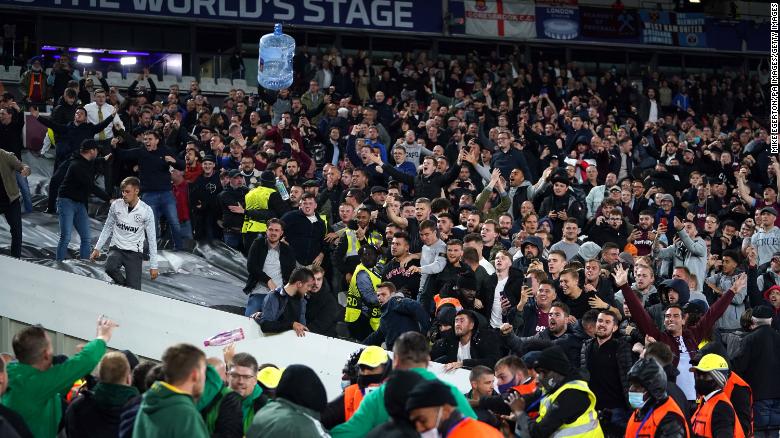 Images appeared to show various missiles, including a water cooler, being thrown between the home and away sections of the London Stadium.

A water cooler is thrown amongst fans in the stands during the UEFA Europa League Group H match at the London Stadium, London.
West Ham manager David Moyes revealed after the game that he had witnessed the trouble from his position on the sideline.

“We want to be a club regularly in Europe, and because of that, we want to behave correctly.
“I don’t know who started it, but we don’t want that reputation. We want to be seen as a club who can travel to Europe and everybody welcomes us,” Moyes added.